How does the features of a sentence influences its popularity

Obviously we used the Quotebank dataset, but more specifically we focused on the year 2017 because we needed both recent and old data so we thought 2017 was a good compromise. We also used a bit of data from Google Trend, especially to get speaker’s popularity.

Should you consider your options together or separatly ?

First thing we did, before even considering modeling, was observing, comparing and trying to find dependance relationships between our variables. We measured the number of times a quotation appears in our dataset, the number of words in the quotation, its average word length, the longest word length ,the number of punctuation signs and the number of repeated words. We also used a log scale on some of these parameters which were skewed. 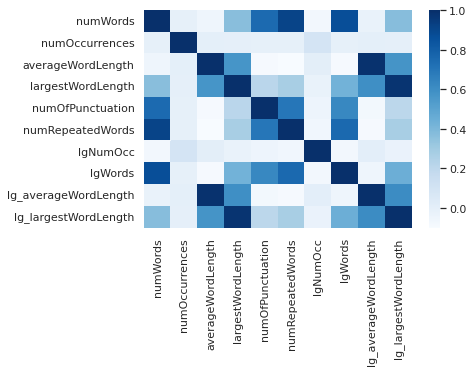 The only stand-out fact we see is that the hight the number of words in a sentence, the higher the humber of repeated words. This makes sense, especially considering we didn’t remove stopwords. So basically, there is no clear dependence between our variables. However it could be interesting to look at our variables separatly ! 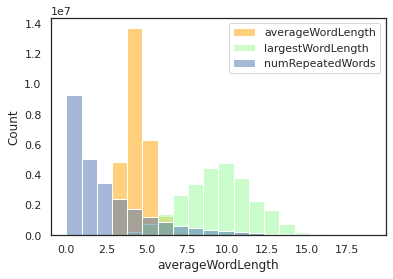 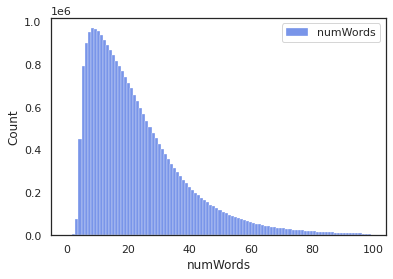 Surely the least squares are gonna tell us something interesting!

We want to find how impactful are there features on ones quote popularity, and as such, we runned a few ordinary least squares models on our data. First we runned it as it is but we didn’t really get good results : about 0.86 for the MSE. So we thought, perhaps if we only focus on popular quotes we could get something… Well, we used the quotes which are cited more than 100 times and we get some significantly better results : the MSE of our model droppesd to 0.382! This is good but still not enough…

Since we couldn’t find anything impactful, we tried engineering our features : add interaction terms, log transforms… Despite trying to add complexity, our results stay more or less the same. First we tried adding each possible second order interaction term, to see if this would improve our results, But no, our MSE doesn’t really improve : 0.380 so an improvement of 0.002. Meh, not very useful ain’t it…

Still nothing, then let’s try on more powerful models !

So even with nonlinear features, we can’t explain our data… well perhaps a better model could do so ? This is why stopped using the OLS method and insteand went with XGBoost, which is a very well known and powerful greadient boosting model! This model has been used in many ML contests and is really powerful for classification. However, it’s still pretty useful for regression, we only need to use an another objective function. Well, this model perform only slightly better, its MSE is 0.008 lower. Well, even more complex nonlinear models aren’t really useful to our study… We can see which feature seems to contribute more however.

Well, it seems that even powerful models can’t explain our theories… so maybe we’re not looking at the right things ?

Still nothing ! Okay we need to go extreme mode then.

Well well well, we tried many different tricks however non of them gave us significant results. Perhaps then it’s time to go extreme mode! To try and remove any confounding, we take a unique prolific speaker and analyse his quotations. However even with such an extreme restriction, we don’t find anything significant, our variables are not relevant when it comes to the popularity of a quote.

Despite our best tries, we couldn’t find anything relevant. If we think about it, it kind of makes sense, if there was an easy formula to make what we say popular, it would be long discovered by now! So as stated in different parts of our report, perhaps a more effective study would be focusing on more complex features which would perhaps have a greater effect on ones quote’s popularity. We strongly believe one can affect their quote popularity with some clever means, however, none of the straightforward ones we studied work and thus further work mgith reveal itself useful.